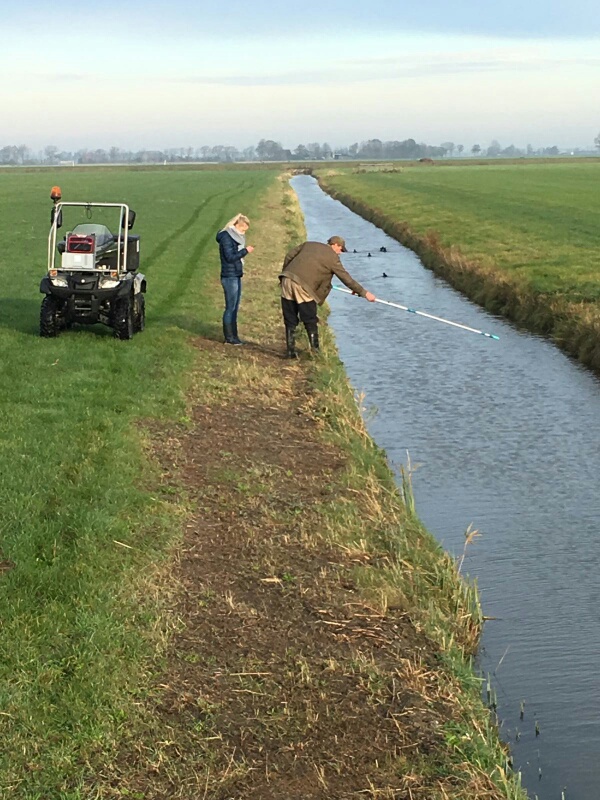 The entrances of muskrat burrows are under water. Because the burrows are thus hidden, trapping muskrats has to be done by specialists and is labor intensive. The presence of muskrats and coypus in water can be demonstrated with eDNA.

The main goal of using eDNA for the detection of muskrat and coypu is the development of an efficient and cost-effective method to improve the current tracking methods for muskrats and coypu. By using this method, we aim for the complete removal of the muskrats and coypu populations in the Netherlands and prevent repopulation by early detection.

How does the eDNA method work?

First, samples of surface water are taken. In order to make the sampling as efficient as possible, a semi-automated sampling device will be developed that takes water samples at predetermined GPS coordinates. This device can be attached to a boat for larger waterways or to a fishing rod for smaller waterways.

After sampling in the field, the eDNA is isolated from the samples and analyzed in the laboratory by use of a targeted, quantitative PCR (qPCR). This is a highly sensitive method that can detect very low concentrations of target eDNA in water.

If muskrat or coypu eDNA-positive samples are encountered in a waterway, the positive sections are sampled more precisely to better pin-point the location of the animals, after which the trapper proceeds with the trapping approach. Because in this way trapping can be done much more localized, this will save a lot of labor as well as prevent unwanted collateral damage to other wildlife.